What is fill film system of cooling tower fill?

There are varies of film system of cooling tower fill. Here I want to introduce fill film system to you.

Fill film is gaining a market share because of its compact performance. Film fill's intricate inner workings provide the maximum water to air contact in that given space. It's very widely used; in fact about half of all crossflow and practically all counter flower systems utilize film fill. 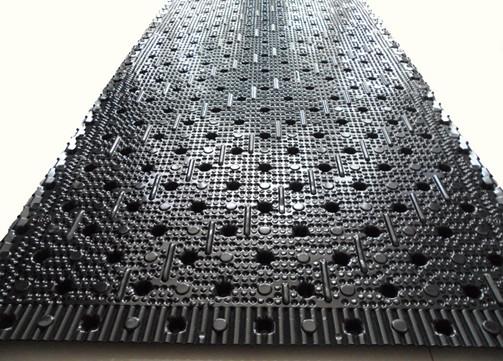 Capitalizing on the hydro-static property of water, film fill material channels water along its corrugated surface. Unlike splash fill bars where water is only making contact with the air on one side of it the film is getting contact on both sides of the inner walls and a channel of air is passing over it. The protrusions or valleys and hills created by the corrugated surface cause intentional turbulence within the fill to maximize the air to water contact and promote the highest possible cooling effect.

During the vertical progress of the water through the fill material splash fill allows for water redistribution, film does not. This means for film fill the initial distribution of water at the time of installation is critical. Water must be evenly distributed down each of the channels so air will flow evenly through the fill. If this is not done correctly or build-up occurs in the fill the air will naturally take the course of least resistance and follow the path without water. When the air isn't being forced to flow by and through the water filled areas the cooling affect is diminished.

ause of the narrow spacing between the internal edges of the film fill it can become clogged easily. Things like leaves, high turbidity, debris, or the presence of slime, algae, or fatty acids can reduce the passage for the air to travel, a bit like clogged arteries. Any time there is a diverted air flow or restricted path for the air the overall cooling effect of the tower is reduced. Unlike splash fill systems you can't just take a look inside to examine the condition of film fill. In fact if owners or technicians can already see clogs in the fill the level of clogging is likely to be extreme. Newer materials have helped improve the pass through of debris and build up which still delivering maximum surface area for water to air contact. Internal texturing helps increase the amount of time the water stays in the fill which improves the air to water contact time and increases the cooling towers effect.

Attention must be used during the cooling tower design phase and any upgrades to the tower as structural blockages to the input air flow to film fill will cause measurable disruption to the air distribution. If this is left unchecked it can cause spotty air distribution which leads to diminished thermal performance. Ultimately to maintain thermal performance both types of fill need to be maintained in all cooling towers.

We provide high quality cooling tower infill for you, please contact us via sales@coolingtowerinfill.com.

Previous: What fill does in a cooling tower?